Life has been crazy busy... Mommi was sick for about a week, then Thanksgiving, and now both Zayit and Ziva are sick.  Ugh.  But in all the germs and family festivities, I finally found the time to order our holiday cards.  Yippee!  Now, if only I can get them in the mail before the holidays are over!  Wish me luck.

Enjoy the next couple of weeks with your families and remember to have lots of fun! Stationery card
View the entire collection of cards.
Posted by Mommi Mandel at 10:45 AM 1 comment: 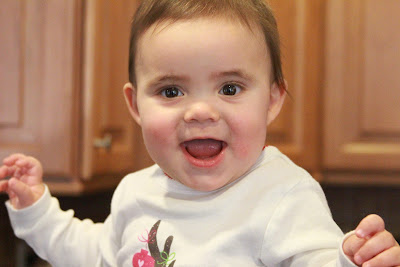 Ziva is getting older (9 months!) and I thought it was about time we did something just for her.  While Zayit was napping, Ziva got to try her hand at finger painting.  It was a very new experience for her in many ways - she was allowed to mess with the 'paint' on her tray, it was cold and slimy, and a new taste for her.  Fun times!  I'll admit that she was less than thrilled at first but in the end, it was a fun experience.

Since everything goes directly into Ziva's mouth, the paint needed to be edible.  I found some great ideas on Pinterest and decided to go with vanilla pudding.

We had a bunch of colored pudding left over, and since we don't really eat that sort of thing in our house, we will be using it in the bath tomorrow night so Zayit can enjoy as well!
Posted by Mommi Mandel at 8:48 PM 4 comments: 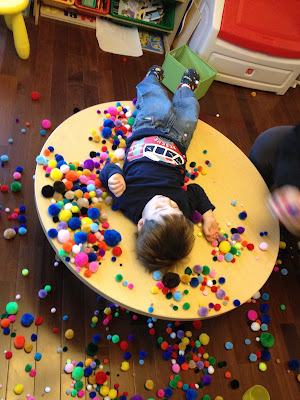 We use pom poms in our house quite often.  We started when Zayit was about 18 months old with a simple busy activity of stuffing pom poms through a hole in the top of a small container.  Such a simple activity, but I have gotten hours of quiet time over the last year or so.  He even takes his little container in the car with him.  We count pom poms, sort pom poms by size, sort them by color, glue them to paper plates, use them for crafts... we do a lot with them. 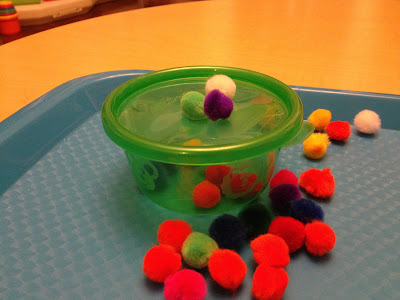 Recently we were running low, so I ordered a BIG bag of pom poms.  They arrived today!  What a fun sensory experience! 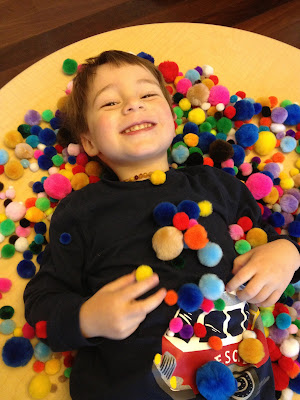 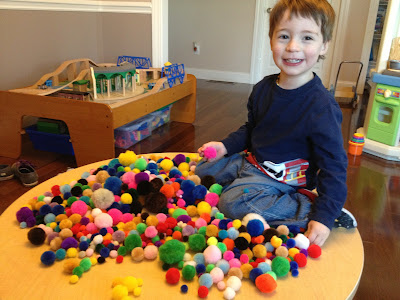 I think he likes his new supply of pom poms!
Posted by Mommi Mandel at 7:57 PM 4 comments:

Zayit in the Kitchen

I have come to terms with the fact that Zayit is a terrible eater.  He isn't picky... he just doesn't eat certain food groups, such as meat or protein.  He is great at gobbling up veggies and fruits, but try and get some sort of protein in him, and I'm out of luck.  The only protein that he will consistently eat, and it's not a great source, is dairy - yogurt, cheese, etc.  I don't usually complain much because he would rather have a red pepper than an oreo... in fact, he will take a bite of an oreo and then hand the rest to me!  His meals are usually a collection of different raw veggies, fruits and yogurt.  The only "main" dishes that he will force dow (and I hate to admit to this) are mac & cheese, pizza, chicken nuggets and grilled cheese.  So frustrating.

Lately I've been having fun with food presentation, and it seems to be helping.  We use skewers, picks and different containers to make food fun.  He has been more willing to try new things, although still sticking to his basics: fruit and veggies.  He actually touched a piece of chicken to his tongue a couple weeks ago - talk about exciting!!!  I've also started including Zayit in the cooking process.  He seems to love this.  He has tried all sorts of things that he has helped prepare.  It gives me hope  :)

This week, we made some homemade pizza.  I was able to snag a few pictures of him enjoying the process.  We had a lot of fun and he ate it!  I felt a little better knowing what was in the pizza he was eating instead of the typical pizza he consumes.  I will definitely be doing this again... maybe even attempt to include some veggies on his pie next time!

He was so excited to eat his "by himself" pizza.  He stood in front of the oven for the entire 11 minutes that it took to cook!
Posted by Mommi Mandel at 9:44 PM No comments: