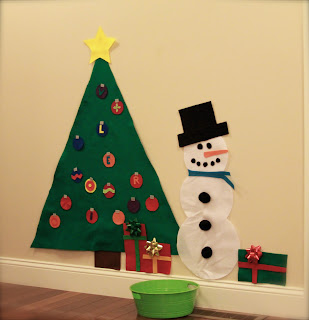 Christmas is coming!  That's what Zayit is saying these days... "Christmas is coming to Zayit's house."  It's so cute.  He thinks that Christmas is an actual person and in a couple weeks someone will show up on our doorstep named Christmas.  It's so hard to explain to him that it's just a day and not a person.  Too cute.

There are so many fun festivities to be had this time of year.  We have double the fun right now - Chanukah starts tomorrow!  We've made foam menorahs, practiced our dreidel spinning and made Chanukah cookies (see our previous post.)

This weekend is our "decorate the house" weekend and I thought it best that I have some decorations for the Littles to play with.  I had seen a similar idea to our felt Christmas tree on Pinterest and I decided this was a must-do/must-have.  So far, it's been a hit. 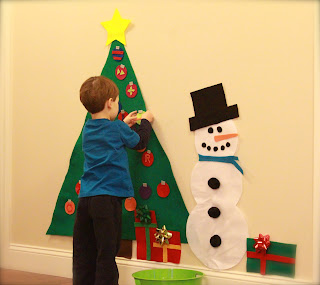 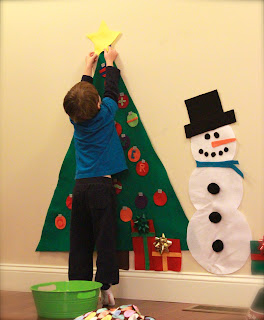 Zayit can decorate and redecorate the tree over and over.  There are ornaments with letters on them, some plain and some with squiggly lines.  This was so simple to make.  I bough a yard of green felt and cut a giant triangle.  The star, ornaments and presents are cut up from felt squares and I used a glue gun to attach everything.  I stuck some wrapping bows onto the presents to add some dimension.  The snowman is also felt with pom pom buttons.

I had initially thought this would be a great way to count down to Christmas by adding a new ornament each day, but I quickly realized that it would get much more play if I made a bunch of ornaments and left them out for open play.  So far so good!

I'm hoping that I will have enough time to do a giant felt menorah tonight!  Wish me luck and enjoy your holidays.
Posted by Mommi Mandel at 10:23 PM