Today we did our first "real" science experiment!  Zayit was excited to see the tray with all the goodies.  He had no idea what I had in store for him, and to tell the truth, I really had no idea what I was doing!  We set out to make our own bouncy balls.  We have a couple bouncy balls around the house and Zayit loves them.  He gets very excited when he plays with them, so excited that this afternoon I had to send him outside with them so he didn't wake Ziva with his squeals.  I did some research last night and came up with a recipe that I thought would work based on other people's triumphs and failures.  I'm not sure I had the ratios of all ingredients correct because our bouncy balls were more bouncy globs.  In our home, it's not about the product as much as it is the process, and we had fun, so I guess out attempts at making bouncy balls was a success. 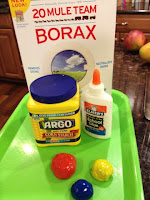 I started by premeasuring everything out.  I put the Borax and corn starch in 1 cup, the warm water in another and the glue and food coloring in a third cup.  I figured it would be easier for Zayit to do this way as he isn't quite old enough for accurate measuring. 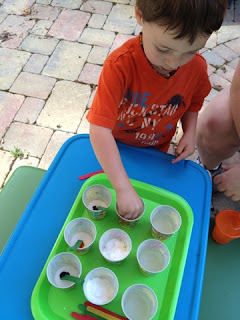 First he mixed the glue and food coloring together to get a bright color (we used red, yellow and blue).  Then he poured the water into the corn starch/Borax cup and mixed it up.  Next he poured the colored glue into the water mixture and let it sit for a minute.  Then he started stirring.  In reality, he stirred for a few minutes, then went off to play while Mommi continued stirring, and stirring, and stirring.  After a few minutes I had a ball of goop stuck to the popsicle stick.  I removed the ball of goop from the liquid and started molding it in my hands.  This is where things got messy.  I wasn't really thinking about the food coloring on skin... thank goodness it washed off, or at least most of it did.  The more molding I did, the more shape the goop took on.  In the end, we had 3 colored balls of semi-firm goop that bounced a bit when dropped.  Zayit LOVED them!  He had a blast bouncing them in his sensory table outside (did I mention that we did this all outside?).  Our "bouncy balls" are now stored in a ziploc baggie for more play tomorrow. 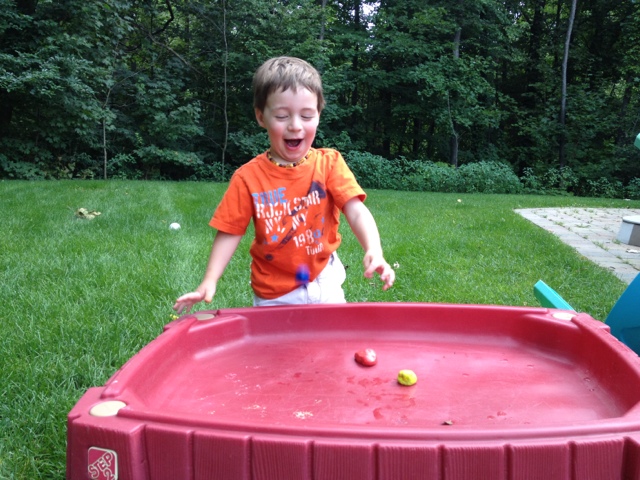 In the end we had fun, but I'm not sure everyone would call this experiment a success... but that's whey they are experiments.  Opportunities to learn and have fun, and we did both!

Good luck if you give it a try!  Don't forget to HAVE FUN!
Posted by Mommi Mandel at 8:20 PM