It has been hot here... very HOT.  Oliver doesn't seem to mind the heat, but it is really making the adults cranky around here!  He wants to play outside all the time.  So, I have to find things that are fun, don't last too long (so we can escape to the AC for a snack) and include water to stay cool.  Enter water balloons.  Nothing fancy, just good old cheap water balloons.  They provided at least an hour of fun entertainment, kept us cool and wet, and when they were gone, well, it was time to go in for snack.  Oliver had a blast dropping, throwing, rolling, squishing and floating them in his water table.  He learned all about cause and effect - drop the balloon and it pops.  He learned that smaller balloons didn't pop as easily, but the ones that were filled up and bigger popped very easily.  We really had a lot of fun with this one.  Every day since then he as asked to play with water balloons.


Calliope enjoyed being outside while we played  :) 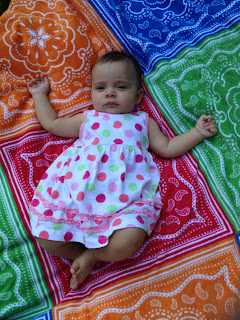 Tomorrow's blog... all about our letter of the week: C
Posted by Mommi Mandel at 9:55 PM