I was in the kitchen preparing dinner and chopping up some left over chicken to make chicken salad for tomorrow and Zayit came in and wanted to help "make a recipe."  He hopped up into his Learning Tower to check out what was going on.  Tonight was salmon burgers.  He was very excited that a "button" was involved.  Yup, that's right, Zayit got to man the food processor.  He was in heaven!  I piled all the ingredients into the container, put the lid on and he went to town with the pulse button.  Giggles a plenty!

After we were done making a mess with the food processor and salmon patties were created, I started to clean up.  Zayit noticed a silver bowl on the counter that had some wet, brown sand-stuff in it.  He immediately went to put his hands in it to play.  My first instinct was to quickly stop him before he made a big mess and shout "NO!"... but I resisted and let him investigate his world.  He had never seen coffee grounds before.  These were used, and in a bowl to dry out for a project we will be doing this weekend (stay tuned for that post - it will be FUN!) 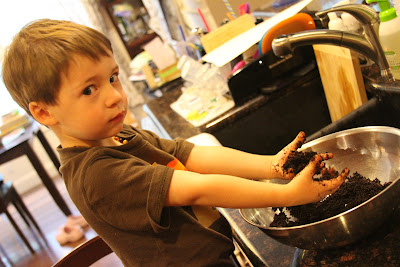 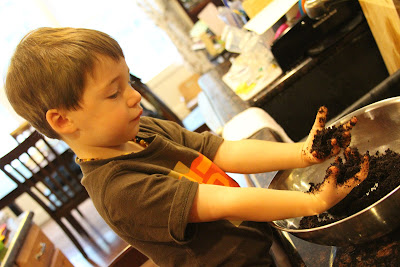 At first he wasn't too sure, but then he got both hands in and thoroughly enjoyed mashing it in between his fingers. 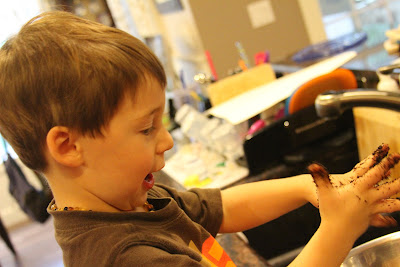 He did this for a good 15 minutes before he announced it was time to wash hands.  I was so impressed that he kept all the coffee grounds in the bowl and made NO MESS!!!  WOW!!!

You never know when a fun new experience will happen!
Posted by Mommi Mandel at 9:58 PM