The Best Toy Ever! 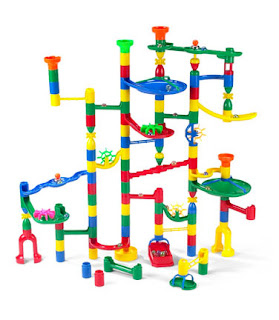 A couple of months ago we purchased a marble run set for Zayit.  We did a little online research, read some reviews (most of which were negative stating that they didn't stay together, fell apart with light touch, etc) and took the plunge.  I picked an inexpensive set from Lakeshore Learning.  If you aren't familiar with Lakeshore Learning, check out their website.  I am lucky (or unlucky) enough to have a brick and mortar location not too far - been there once - afraid to go back because of the damage I could do!

This toy has been used EVERY DAY since we bought it in May!  I haven't put it away once.  It sits in our playroom and gets played with multiple times a day.  Sometimes for a few minutes, sometimes for as long as half an hour.  I can't believe how much use it gets.  I've even enjoyed it - I'm the one who redesigns it every couple of weeks.  It's quite calming.  After the Littles go to bed, I go in the playroom and spend 30 or so minutes reconstructing.  It's kind of challenging to see if I can use up every last piece.

Recently, even Ziva has found enjoyment in the Marble Run.  She can't play with it herself yet, being only 6 months old, but she loves to watch the marbles go down and tracks them from start to finish.  There are very few things that I can do with both kids at the same time. 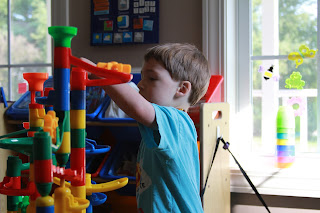 Zayit isn't quite advanced enough to build on his own yet, but it is amazing how interested he is in watching how things work.  Whenever there is a new design, he spends time watching the marbles go down and tries to stop them along the way.  He also puts the marbles in a different points to see where they go.  I can't wait until he can construct on his own! 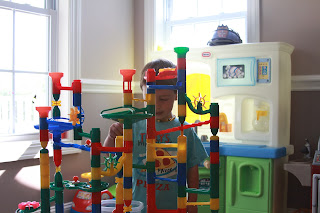 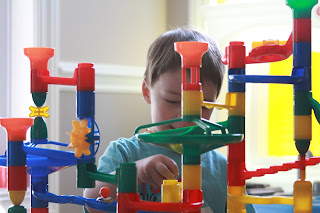