I've found that having a couple of "busy trays" ready to go at all times is extremely helpful these days.  Now that I have 2 Littles, there are times when I need Zayit to occupy himself for a few minutes so that I can change a diaper, feed Ziva, put a load of laundry in, take a phone call, etc.  If I have been able to stay organized for the week (ok, so that doesn't always happen!), I can reach for an already prepared Busy Tray and get those few minutes.  Zayit loves things that he can do independently and gets so excited when he accomplishes something.  Below you can see a couple of different Busy Trays that I keep on hand.  I don't always use the same activity because that would get boring, but rather, rotate the ideas or change them up just a bit.  I also use the Letter of the Week trays in the same manner sometimes.

Lego Duplo patterning:  I create a specific pattern with Duplos and leave exactly the same color/number of blocks needed to copy it.  Zayit gets to take a few minutes to put it together "like Mommi."  This is great for his logical thinking and requires just enough focus to keep him occupied for a few minutes.  I've seen others who have pictures of different Duplo patterns and leave those out to be copied.  I would love to do this, but haven't had the time to get the pics together yet. 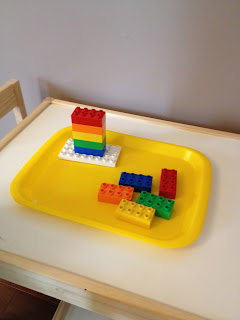 Pompoms and a container:  We have an old plastic container that I cut a whole in the top of and Zayit will push the pompoms through the center.  So simple and amazingly intriguing for him.  Lately he has been doing this in the car while we drive.  Who would have thought that this would be so fascinating!  I initially started with 3 of each color when he was just learning to count, and now I vary the number of each color and he can count out loud.  Great for fine motor control. 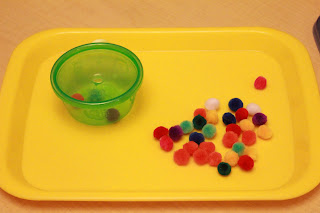 Marbles and a mini ice cube tray: not much to say here.  The boy loves marbles and he likes sticking things into other things.  The only problem we had with this one was that he couldn't get the marbles out without dumping the tray over... which led to a marble mess!  I since have shown him how to turn it over to empty it onto the tray so the marbles stay in one place. 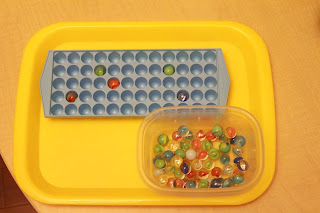 Mini ice cube tray, water and a pipette: As much as he loves his marbles, he LOVES playing with water!  We did this in the kitchen, removed his shirt prior to play, and climbed up into the Learning Tower for some fun.  I got a good 25 minutes out of this one, and the clean up was a cinch! 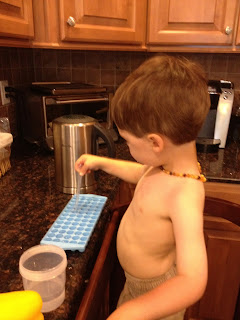 Pompom sorting: tweezers, pompoms and a paint palette.  We have been working on using tweezers for a couple of months.  He doesn't quite have enough strength to use them correctly, but recently has been successful in picking up a pompom with the tweezers.  Up until now, he would play with them and use his fingers to transfer the pompoms. 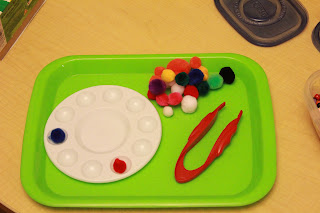 Bead color sorting: Zayit is amazed by rainbows.  We have the order of the colors down and he is drawn to rainbow activities.  I set up the bottom tray as you see it and then he sorts out the rest of the beads into the appropriate spots.  We've been doing this for a couple of months and he still hasn't lost his interest. 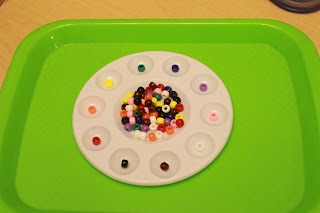 One to one with beads, marbles and a suction cup thingy: great for fine motor control, either using the beads or the marbles, he fills up each cup while he either counts, announces the color or both.  We do this sometimes while eating breakfast or having snack. 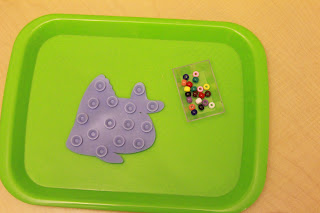 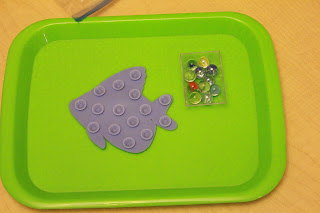 "Beading" with pipe cleaners and cut straws: This isn't one of his favorites and I usually only get a few minutes out of it.  We haven't tried it in a little over a month, so I think we might bring it out again to see if his interests have changed. 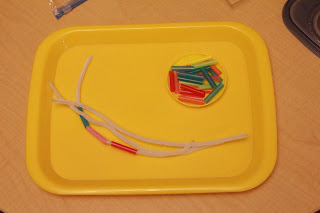 Button Snake: all this fine motor work is great for the pre-writing stage.  I'm hoping that it pays off with awesome penmanship!  This is an easy one to throw in your bag and take along.  I sewed 2 large buttons onto opposite ends of a ribbon and then cut different shapes out of felt.  Cut a slit in the felt shapes and go to town buttoning and unbuttoning.  We did this a lot when we were learning about shapes and colors. 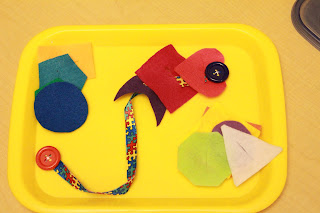 Last but not least... this is one of our FAVORITES... a bucket of foam letter stickers and paper! 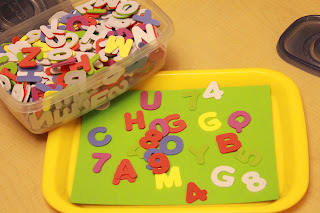 I'm sure I will add to this list as time goes on, but this is a great starting point.  You can see that I reuse materials in multiple activities to change things up a bit.  I keep most of these stored in quart size zip baggie in a bin and just grab a few items and throw the trays together.  Once I started doing this and had some of the basic supplies easily at hand, it was easy to get creative and mix things up a bit.  Good luck!