Yesterday we needed a quick activity to avoid a nipshin... Salt Dough to the rescue!

(To clarify what a nipshin is, in our house, we refer to temper tantrums or meltdowns as 'nipshins'.  It all started when Zayit was just learning to talk and was recovering from one of his best meltdowns.  Daddy asked him if he was having a conniption fit.  Zayit responded, between boogery sobs, "yes, nipshin."  The term 'nipshin' has stuck ever since.)

Out comes the flour, salt and water.  Salt dough is quick and easy.  Set up takes less than a minute and clean up is a cinch.  Any time we can make a 'recipe' in our house, Zayit is happy - he loves SuperWhy and recently there was an episode about making a carrot-applesauce cake, often referring to the 'recipe.' I can convince that kid to stop whatever he is doing and help Mommi as long as it involves a recipe.  I'm very creative - you wouldn't believe what requires a recipe these days! 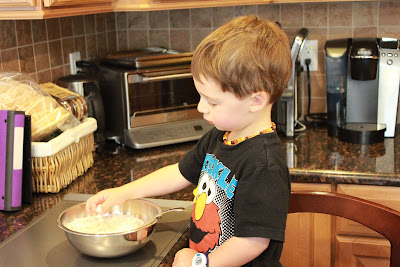 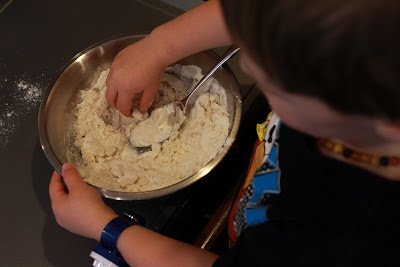 Zayit measured (with help) and poured everything into a bowl.  I started the stirring to get the flour wet, then handed the bowl to him.  He continued on, then kneaded the dough until we had a lovely firm but squishable ball.  He pressed it out and made a perfect handprint!  This was so easy, we made another dough ball for Ziva and pressed her hand as well. 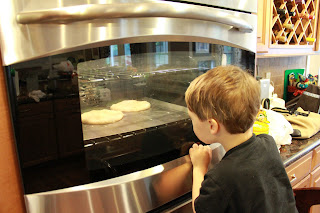 The hand prints were baked in the oven for a total of 5 hours (3 hours on a cookie sheet, then another 2 on the rack to dry out the bottoms) at 200 degrees. 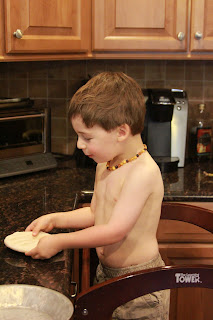 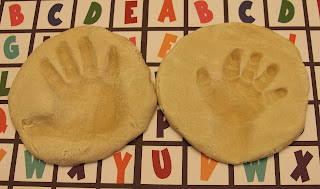 I'm not sure what we are going to do with these now, but I'm hoping to come up with something creative.  Maybe placing them in the garden?  Painting them and giving to the grandparents as gifts?