I'm always one for a quick craft that can break up the day and prevent a nipshin that's about to happen.  Yesterday, when Zayit woke from his nap, was the perfect opportunity for one of those little crafts that Mommi has up her sleeve.  If you know Zayit, you know that you have a 50/50 chance of a pleasant wake up from nappy.  Lately it's been getting better, but still... you just never know!

Enter the Halloween I Spy Bottle.  I first saw this idea here.  I had everything needed already in the house, so it was just a matter of collecting all the little goodies... 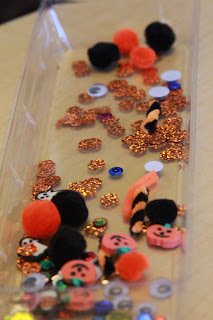 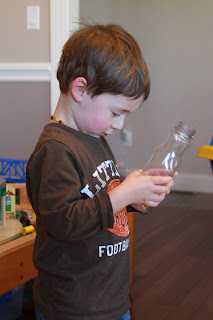 Zayit was fascinated by the different sounds that the various objects made when he dropped them in the bottle.  The erasers were "very noisy" whereas the pompoms made no sound.  He was entertained for a few minutes and put about half the objects in the bottle before moving on.  I finished it up later, added the water and glitter, hot glued the lid on and left it out for him to find the next morning. 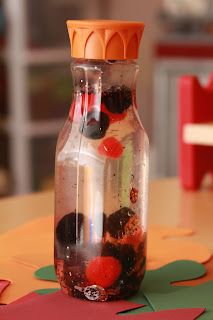 He has enjoyed shaking it a bit and watching the glitter swirl around.  He has just started to find snow globes fascinating, so this is kind of the same idea.  We also used a magnet on the side to pull the pipe cleaners to one spot - this was very intriguing for him. 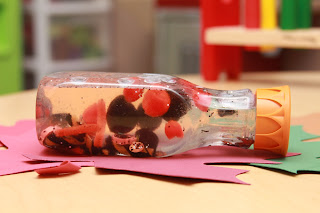 For a quick craft that required no dollar investment, it was PERFECT!
Posted by Mommi Mandel at 10:19 PM